The Order of English Adjectives 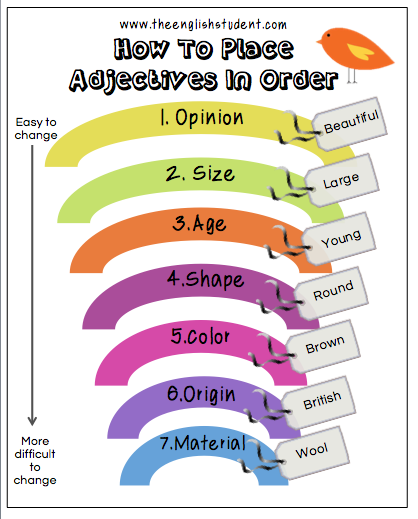 Unlike Romance languages like Spanish or Italian, English posits descriptive words BEFORE the noun (Person, Place, Thing, or Idea).

For example, in Spanish we have:

However in English we have:

(if it were the place where the U.S. President resides we would write it, “The Whitehouse”.)

2. What was she wearing last night?

She was wearing a long yellow cotton party dress.

3. What were your clothes packed in?

They were packed in a flimsy green cardboard shipping box.

4. What are you looking for while in London?

« Count? or Non-count? These are the REAL Questions Embedded Questions and Content Questions »